AUNT EVELYN AND I HEAD TO CALVARY CEMETERY, as we do every June, to place flowers on Uncle Jerry’s grave. Along Front Street in Saint Paul, this Catho­lic cemetery is the final resting place for many of my relatives. Jerry is bur­ied in a section that looks like a grassy crater, downhill from a discreetly segregated stronghold of priests and nuns. Two simple markers indicate Jerry and Evelyn’s gravesites. Only today we can’t find them, and I again ask if she remembers any landmarks that will help us locate Jerry.

“He’s buried ten yards from where a tree used to be,” she says, wav­ing her bouquet of yellow and white daisies at the distinctly treeless area where we are standing. Evelyn deftly moves among the tombstones like someone twenty years younger than her eighty-five years.

I hike uphill to try again when I see a large stump, barely visible in the overgrown grass. Glancing around, I spot a few graves I hadn’t noticed before, and there is Jerry’s. Next to it is a flat stone marker bearing Eve­lyn’s name and year of birth: 1909.

When Evelyn turns ninety, she asks my mom, her youngest sister by twenty-two years, to drive her to Liberty State Bank to renew her CDs. She wants to make them five-year certificates to get a higher interest rate. Mom suggests that maybe five years is too long. Reluctantly, Evelyn agrees and renews the CDs for twenty-four months.

Five years later, Evelyn is at the funeral home to plan and prepay her funeral expenses. She selects a smokey-blue metal casket with a simple satin lining and makes plans for the funeral lunch. When it comes time to write the check, Evelyn balks when the funeral associate says she can’t pay for her funeral in installments.

Grumbling, she pulls out her checkbook. “Even Dayton’s used to let me do layaway.”

My brother Mike and I take a reluctant Evelyn, now ninety-eight, to view an assisted living facility we think she will like. She’s been living in a one-bedroom apartment on Randolph Avenue for thirteen years, an easy walking distance to her church, grocery store, and favorite place to get a haircut—a barbershop.

Evelyn tours the residence in the Midway area, just blocks from Edmund Avenue where she grew up. We check out apartments of varying views and visit the dining room, where we eat a lunch of hot turkey with mashed potatoes and limp green beans. The manager provides more information about their services, noting that there is a yearlong waiting list. Evelyn nods and smiles as he talks.

“Well,” he says, leaning closer to her good ear. “How does that sound to you, Evelyn?”

“This seems like a very nice place to live,” she says. She picks up her purse and stands. “When I’m ready to move.”

Evelyn holds out a few more months living independently, but when the call comes later that fall that there’s an opening at the assisted living facil­ity, she takes it. She settles in, falling asleep to the neon glow of Porky’s Drive-In outside her window.

At her 100th birthday party, Evelyn is asked the secret to her longevity. She shrugs her shoulders and smiles shyly. “I just wake up every morning.”

Another birthday rolls around and three generations of nieces and neph­ews are gathered to celebrate with Evelyn.

My cousin Sheila leans in to kiss Evelyn on her cheek.

Evelyn tilts her head quizzically and says, “Don’t you know?”

Two weeks shy of her 104th birthday, Evelyn becomes the oldest resident in the nursing home. By her 105th birthday, she is back in second place when a 107-year-old moves into the building.

Evelyn is on the second-floor patio outside her room, dead-heading bright marigolds and red geraniums from her wheelchair. It’s one of her favorite pastimes, reminiscent of the gardening she and Jerry once did together. She studies the row of potted plants along the iron railing. One by one, Evelyn snaps off their shriveled ends. She tosses the spent buds over the rail­ing, watching them drift into the unknown. 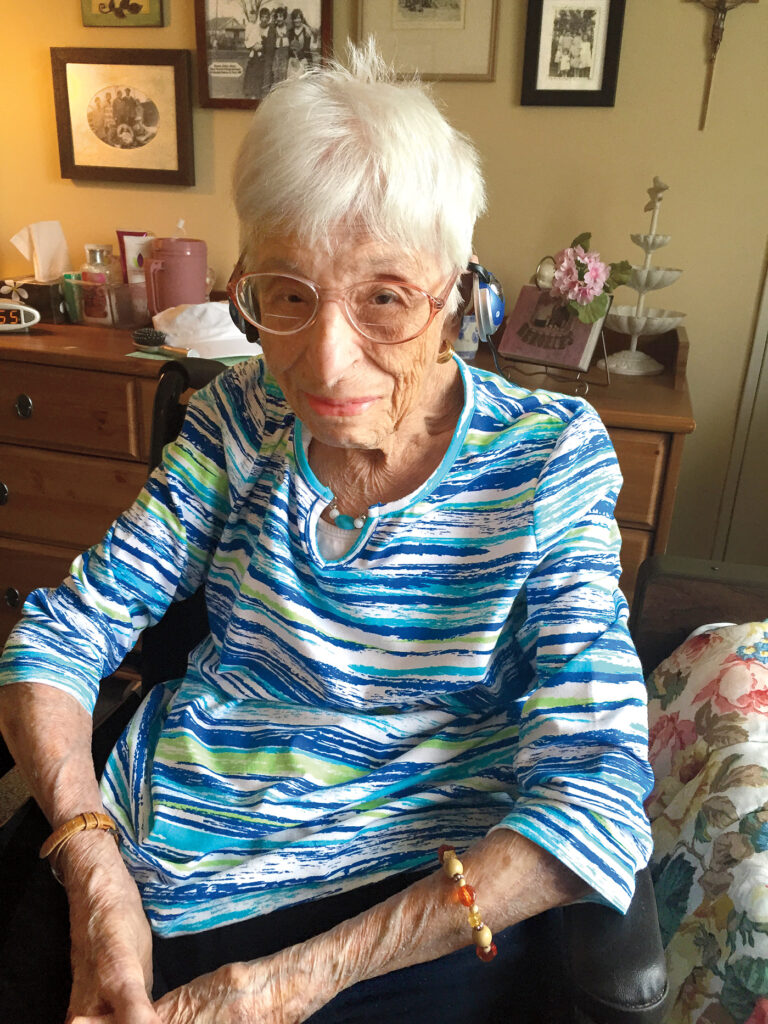 Christina Joyce often seeks writing inspiration in other parts of the world but finds her richest material comes from right here in Saint Paul, where she grew up.