Griggs Street runs south to north through several Saint Paul neighborhoods. But in the Como Park area, it is only one block long. During the late 1950s, this was a quiet street, lined with small prewar homes and beautiful elm trees that created a canopy over the street itself.

We kids were the Mickey Mouse Club of Griggs Street. There were nine of us between the ages of about six to eleven, plenty of companions to while away long summer days hiding and seeking and jumping rope.

But it was baseball that filled our hearts. In those days, the Twins were just a gleam in Calvin Griffith’s eye. But we had the Yankees and the Dodgers. Mickey Mantle, of course, was the best, but Sandy Koufax and Willie Mays were close seconds. Part of our hero worship included collecting baseball cards, and of course, trading and bartering to gain our particular favorites. Our weekly nickel would cover a pack with one piece of bubblegum and one baseball card. A pack of five cards cost a quarter. Not all of us were lucky enough to spend that much except Jimmy, an only child whose parents were rich and gave him a dollar a week. Jimmy had accumulated enough cards to create a lending library. Sometimes he would let us keep one or two for a few days, just so we could savor them and memorize the statistics. A budding capitalist, Jimmy decided one summer to charge a penny for the privilege. He lost a few friends on that one.

My best times, though, were playing baseball. Early on, my dad had bought me a first baseman’s glove. It was a deep burgundy color, and the smell of the leather was divine. I really loved that glove. Sometimes after dinner Daddy and I would go out in the street, and we would lob a big softball back and forth. Eventually I graduated to catching his pop flies and groundballs. I got so good that everyone called me the neighborhood tomboy. It gave me some status.

The school baseball diamond was far, and too big for us little kids anyway, so we made do with the street. The only drawback was that we had to keep a sharp lookout for cars, and scatter to the sidewalk when necessary. After the car passed, we would pick up where we left off. In the beginning, we tried to create a regular diamond, with second base and home plate in the middle of the street. But we didn’t have a plate or bags like in a real game. So we decided that the space in front of the catcher was home plate. It made for a few controversies but worked well enough. Second base was a problem, though. The workaround was to have four bases instead of three. Four boulevard trees became the bases, two on each side of the street. This eventually led to another issue: It was too easy to take a big lead practically all the way to the next base. So we made a rule that if you were on base, you had to touch the tree until the ball was in play.

When it came time to choose teams, Normie and Brian, being oldest, were the captains. Boys were chosen first. I was always the first girl chosen, a point of hidden pride. I loved it when Normie chose me, for I had a secret crush on him.
Even though I had a first baseman’s glove, it was my fate as a girl to be in the outfield. But when it was my turn at bat, watch out. Then the boys were glad I was on their team. “Batter up!” It was hard to match that combination of excitement and nervousness, pitting myself against the pitcher. When my bat did connect with the ball, it was usually a line drive. Even though I ran as fast as I could, I was hampered by those right turns forced on us by the four bases. But I often got across home plate and scored.

Years later, those days of baseball on Griggs stood me in good stead. Playing intramurals at the University of Minnesota, I discovered a talent for pitching, and particularly enjoyed striking out the men. 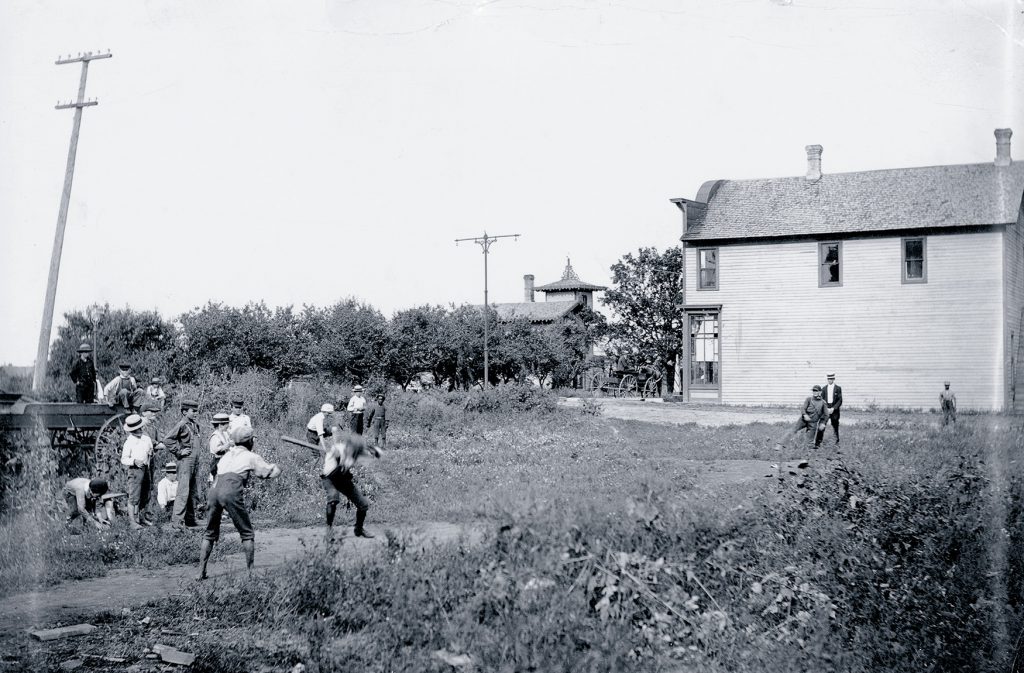 Gloria Burgess Levin is a psychoanalyst who grew up in Saint Paul but now lives in Minneapolis. She remains so fond of Saint Paul that she makes several forays a week across the river to go “home.”